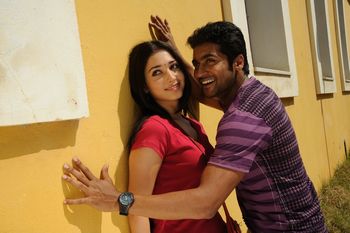 Ayan is average film. It could have been much better if director had put some serious effort in creating a heartwarming story, than concentrating too much on how criminals carry out drug trafficking. The problem is, Ayan wonât touch your heart. Everything else is good.

The story itself is not so catchy. It loses pace when songs arrive. The songs incorporated make the film drag from the main story.

Even though there were fans for the music done by Harris Jayaraj, the visualization and narration of film was not good enough. The script is not tight.

In Ayan Surya is an international smuggler working under Prabhu. The good thing is that it wasnât soo cinematic. In the second part he works for the law. The scene in which Surya is introduced starts with a poor surprise.

Viewers get educated about how criminals are smuggling diamonds and drugs. Director has taken strain on doing research on the subject.

Some scenes in the first part and the climax are taken in Congo, Africa. In the second half there is chase scene which takes place in Malaysia.

Thamannaâs acting is not good enough. She acts as if taken for a joy ride. If this is the best from Thamanna then her future in acting career looks bleak.

The acting exercises of talking to oneself, acting foolish and innocent were carried out by Surya as in every Tamil movie.

The outstanding thing to be said about the movie is its stunt sequence and graphics. Especially the first stunt which takes place in Congo is extraordinary.

The crossing of train just before interval makes viewers spellbound. Even though the villain is ok, his character could have been developed more. The mother son relationship shown is making less impact.

Prabhu has acted well. The character he plays suits him. Even if we realize this film is lengthy, when people get out of theatre they feel that they missed something miserably, and thatâs a real story that have crux.

What if a film is good in bits and pieces?